I made my regular Friday trip to Toys R Us on my way home from work on Friday and was pleased to find they still had the Ultimate Jungle Hunter from NECA on the shelf.  I was also hoping, but kinda glad I didn’t, to find the new Terminator figure.  I can only afford so much NECA in one day.  The weather is finally starting to act like spring up here in the Pacific Northwest, so I made it a point to throw him in my pack before my weekend hike.

The Ultimate Jungle Hunter has all the great detail you come to expect from NECA’s Predator figures.  It comes packaged in a collector-friendly deluxe window box packaging with opening flap.

The arm communicator is a lot sturdier on this figure than the Ultimate City Hunter.  On Twitter, quite a few (including mine) broke upon opening for the first time.  As always, NECA’s customer service handled getting fans replacments like a champ.

Like all NECA figures, he stands in a lot of different positions on his own, even in moving water.  This makes it easy to recreate all the classic scenes from the original Predator movie. 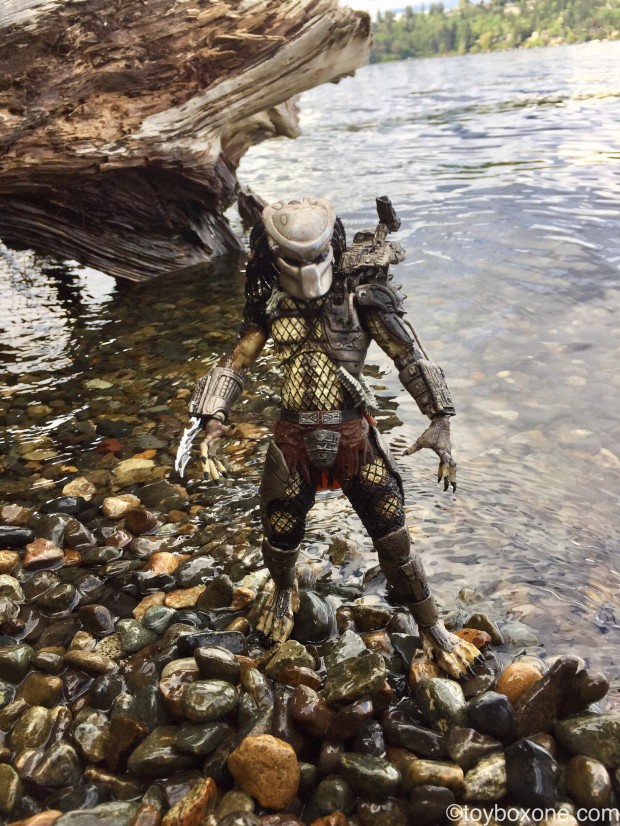 The Ultimate Jungle Hunter comes with two head sculpts, masked and unmasked.  A mask is also included, but unfortunately it doesn’t fit on the unmasked head.  One of my favorite things are the trophy necklaces.  Something so small adds so much to the overall detail of the figure.

Other accessories include interchangeable heads and hands, a skull and spine, mask, cannon blast effect, a human skull, and removable backpack. 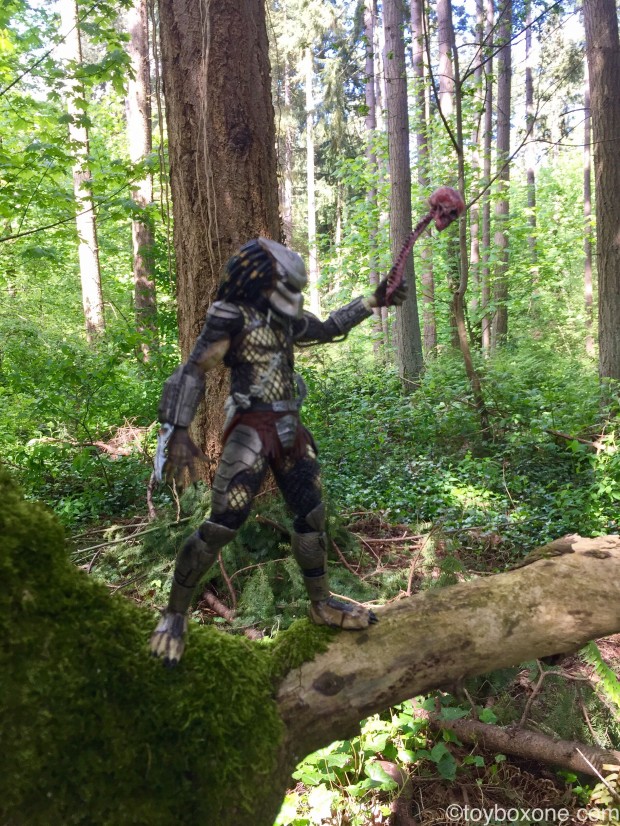 There isn’t much to dislike about this figure.  One con would be the shoulder gun.  The part that attaches the gun to the backpack always seems to get stressed out and break.  The gun usually stays on so its not a critical flaw for me.  While out I forgot to get good pictures of the retractable blades.  Unlike most Predator figures, they are not removable.  They do, however, extend and retract as seen in the crappy shot below.

You can look for the Ultimate Jungle Hunter on Toys R Us shelves or at your favorite online retailer.  If you find it, get it, this figure is a must have for any Predator fan.  Hopefully we can make these reviews more of a regular thing in the future.