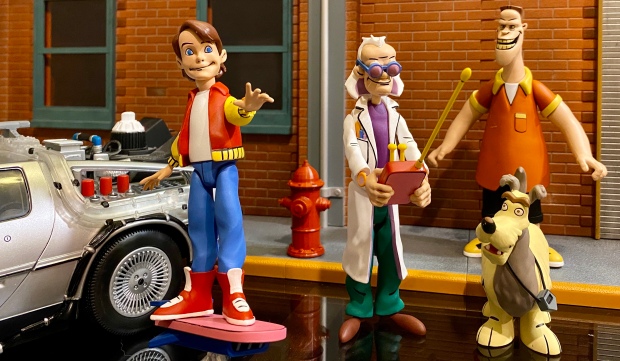 If you aren’t aware by now, Back to the Future is one of my favorite franchises.  I still wear a calculator watch and owning a Delorean is still on my bucket list.

The animated series picks up where the movie trilogy left off with Doc Brown on his Hill Valley farm with wife Clara and sons Jules and Verne.  Although the usual movie characters made occasional appearances, the show focused primarily on the Brown family.  The show ran for 2 seasons on CBS on Saturday mornings from 1991-92 before the reruns reappeared in the FoxBox in the early 2000s.

Trivia note: It was the first production of Universal Cartoon Studios.

NECA knew how popular the franchise was and worked some of their usual magic to acquire the license for not only the movie related stuff but the animated series as well.  When they made all of their Back to the Future reveals at Toy Fair, I was most excited for the Ultimate movie versions but was pleasantly surprised they decided to give us some animated series offerings as well.  I also feel it was smart thinking to follow the Toony Terrors model keeping them simple and affordable.  At $12.99 each, it makes the decision much easier for someone who is on the fence. END_OF_DOCUMENT_TOKEN_TO_BE_REPLACED

If you know me, you know how much I love the Back to the Future franchise.  I have all the POPS!, including the Lootcrate Doc Brown and Hover Board Marty.  It looks like Funko is adding Back to the Future to their Dorbz line with Marty, Doc, and Einstein and the DeLorean. END_OF_DOCUMENT_TOKEN_TO_BE_REPLACED